DOS Group:
Twenty years of innovation at the service of companies and people 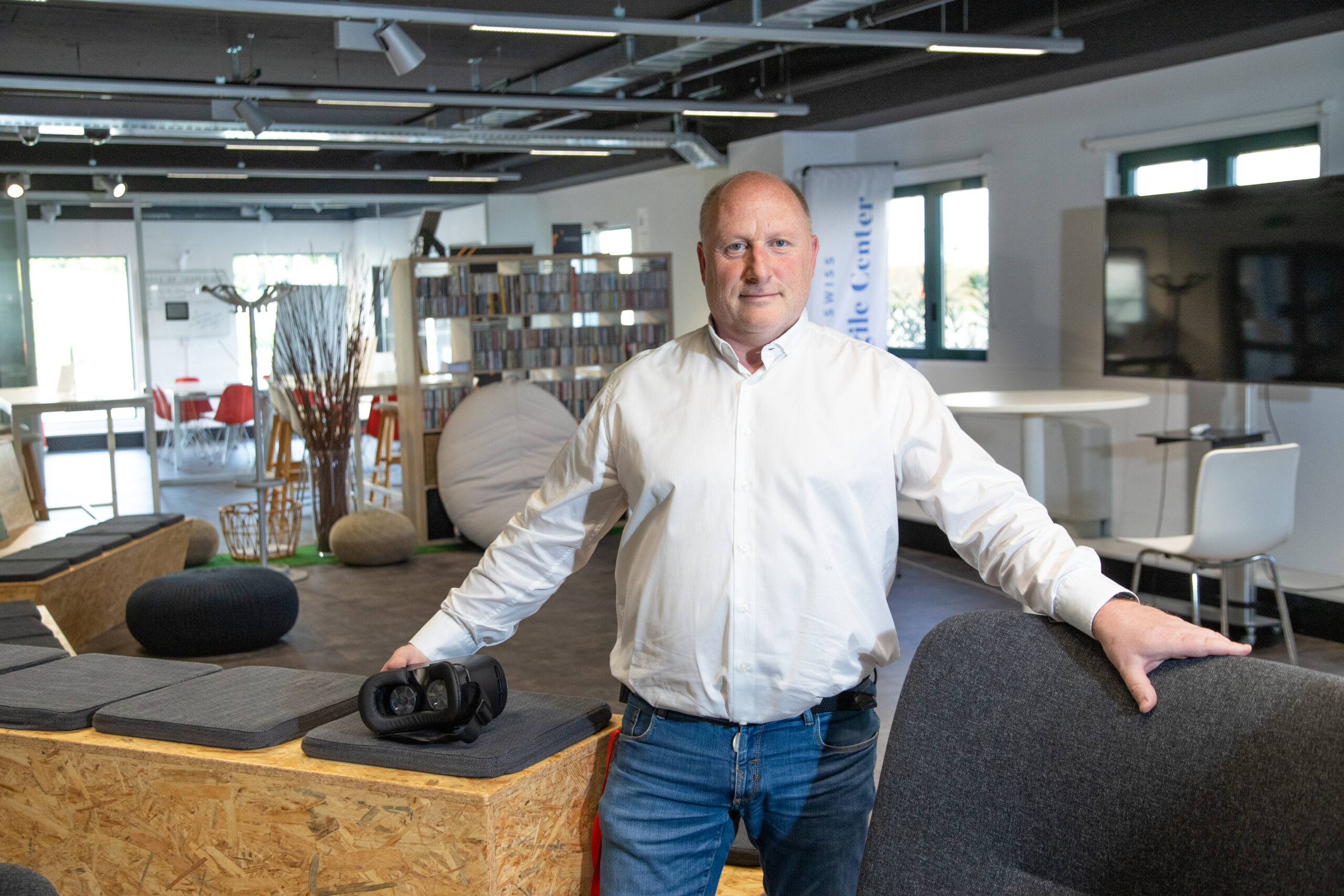 Hi Stefano, thanks for taking part in 101 success stories in Ticino. How did the business start?

I’ve always worked in IT and computer science in general. Initially at Mikron in Agno where I was an apprentice machine designer, then I moved to the IT department. After this experience I moved to the IT department of a bank in Lugano and, in parallel, I deepened my path in the Swiss Alpine Rescue. This period pushed me to leave the banking context to dedicate myself to the mountains, skiing, rescue and to the creation of my own company. The first office was in Arzo, a village above Mendrisio, and fortunately for me I could already count on a consistent package of friends, more than customers, with their companies. From this moment on, the growth has been constant and fast. Shortly after I started to hire the first employees and, later, I bought a building in Besazio, which after only two years was expanded by one floor.

Year after year the company grew and started to diversify: we were among the first to deal with mobile applications, to get interested in software development and, in the field, to open a marketing office. Later, we bought the building in Mendrisio, the current headquarters of DOS Group (dos-group.com), an IT company with over 20 years of experience that during the years of activity has created a dense ecosystem capable of bringing together a range of innovative skills at the service of the customer.

In 2014, in collaboration with Ticino Cuore, Momentum (momentum.dos-group.com) was born, a software entirely developed and patented in Switzerland, which facilitates the management of groups of lay First Responders and which has allowed to bring the Canton of Ticino to the first places worldwide for the number of lives saved in case of cardiac arrest. A few years later, in 2019, Studio MACACO (studiomacaco.ch) joins the group as a start-up specializing in Software development in AR/VR and Gamification. In the same year, a space to promote smart work is opened for entrepreneurs, students and professionals in the area: the Swiss Agile Center (agilecenter.ch). Open 24/7, this space offers the opportunity to exchange ideas, develop collaborative projects and expand one’s network.

This diversification is based on a fundamental concept: the creation of an ecosystem suitable and adaptable to every need. The mission of DOS Group is in fact to simplify the life of its customers and allow them to focus on their business, with the knowledge that they have a partner at their side who can support them in their daily technological activities. But that’s not all. At DOS Group we aim to anticipate, recognize and develop opportunities and trends to give clients the chance to take that strategic step towards innovation that would successfully differentiate them from the competition.

A BEAUTIFUL STORY BECAUSE IT HAS A COMMON THREAD: A GUY WHO WORKS IN A BANK, LEAVES HIS JOB TO CREATE HIS OWN COMPANY AND DEDICATE HIMSELF TO RESCUE, THROUGH DIGITAL TOOLS. I THINK GETTING UP IN THE MORNING AND KNOWING YOU’RE DOING SOMETHING THAT HELPS OTHERS AND SAVES LIVES IS A PRICELESS JOY.

Exactly. This is a great fortune of mine and the rescue field has definitely helped me. Working on software that can save lives, such as Momentum and ArvaDOS, has also played a key role in employee motivation, which I believe is the key to DOS Group’s success.

The developers and technicians working on the various projects are in fact involved and aware of the fact that problems or malfunctions could cost lives. This aspect, together with the conviction of doing something useful, are some of the reasons that gave us the courage to grow. Courage that is demonstrated daily through our attitude to innovation, which has always been part of the DNA of DOS Group. In fact, we are recognized throughout Switzerland as pioneers in the world of intervention, so much so that we can boast of three projects funded by Innosuisse: Neural Eye, CPRDOS and ArvaDOS, the revolutionary system of search and rescue of missing persons.

WE CAN TELL READERS THAT, TO HAVE A SUCCESSFUL COMPANY, YOU NEED A COMMON VISION AND A GOOD DOSE OF COURAGE, BECAUSE YOU ARE CONFRONTED WITH A WORLD THAT IS INCREASINGLY FAST-PACED AND COMPLEX. WITHOUT STRONG MOTIVATION IS IT DIFFICULT TO MOVE FORWARD?

Yes. I always remind my collaborators, even at the risk of sounding arrogant, that we have no competitors in Canton Ticino. This is because we see our work as a goal to be achieved, as a mission to be accomplished. I give them the example of when I go to look for a missing person and I have to explain to the family that, together with the team, I will do everything I can to find them. In this type of situation, my fellow rescuers must also believe in the mission, because they too are in the field. This, in a way, is what happens in DOS Group as well: sharing the same goal and working together to achieve it. To this vision you must surely add a good dose of courage.

At DOS Group we believe a lot in staff training and in the figure of the apprentice. We see young people as the future thanks to their ability to easily understand new technologies. Being able to amalgamate these elements means having a team that will always work for the good of the company, making the company’s mission its own.

Stefano, what word would you use to identify your company and why?

In one word? It’s difficult. Innovation, certainly, but also courage. Two words that are basically linked. In fact, innovation always requires courage. Personally, I am convinced that in Ticino we have a high level of competence, but we are often afraid to make the leap, to leave our comfort zone. It is precisely this propensity towards innovation that has allowed us to arouse interest and curiosity even in inland Switzerland, which is usually more difficult to reach.

Of expansion, certainly. We have very important and ambitious goals: we are structuring the company with the aim of making it the beacon of reference for the Canton of Ticino and the rest of Switzerland in terms of innovation in the field of emergencies and digitalization of the workplace.

YOU HAVE CONVEYED POSITIVITY AND IMPORTANT CONCEPTS: GROWTH, COURAGE, INNOVATION, SHARED VISION. IMPORTANT WORDS THAT ARE TRANSLATED INTO FACTS BY TWENTY YEARS OF HISTORY. GOOD LUCK FOR THE FUTURE AND FOR GROWTH.

I would like to reiterate once again my conviction: to grow and innovate you need a team, those who believe in the project, those who share the same mission.

The book 101 success stories in Ticino is available in all bookstores.

Everything you need to know about the Sophos XGS Series

END_OF_DOCUMENT_TOKEN_TO_BE_REPLACED

Best-in-class security and performance: what to expect from Sophos Firewall XGS

The new year also brought news on the security side, thanks to Sophos’ commitment and ambition to achieve power and effectiveness with a single solution…

END_OF_DOCUMENT_TOKEN_TO_BE_REPLACED

3CX and Microsoft Teams Integration: All the Benefits

As of recently, 3CX enables a full native integration with Microsoft Teams, making it possible for users to use a unified system without having to switch between 3CX and Teams to make or..

END_OF_DOCUMENT_TOKEN_TO_BE_REPLACED
« Older Entries
We use cookies on our website to give you the most relevant experience by remembering your preferences and repeat visits. By clicking “Accept All”, you consent to the use of ALL the cookies. However, you may visit "Cookie Settings" to provide a controlled consent.
Cookie SettingsAccept All
Manage consent

This website uses cookies to improve your experience while you navigate through the website. Out of these, the cookies that are categorized as necessary are stored on your browser as they are essential for the working of basic functionalities of the website. We also use third-party cookies that help us analyze and understand how you use this website. These cookies will be stored in your browser only with your consent. You also have the option to opt-out of these cookies. But opting out of some of these cookies may affect your browsing experience.
SAVE & ACCEPT